These cast iron skillet roasted vegetable and chicken nachos are loaded with fresh vegetables and delicious shredded chicken. Topped off with cheddar cheese, these hearty nachos are very filling and make a quick, no fuss meal.

*Disclosure: Some of the links are affiliate links, meaning, at no additional cost to you, I will earn a commission if you click through and make a purchase.

I am always on the hunt for and trying to create, delicious, healthy and easy meals. One of my favorite kitchen tools is my cast iron skillet. Give me a recipe that requires only my trusty lodge cast iron skillet and I am a happy girl! Seriously, what can’t a cast iron do? I have made cobblers, frittatas, pot pies and now nachos – my cast iron is definitely my bff 😉

Nachos are not typically what you think of when you are looking for a healthy, filling meal – but these nachos are different. These have a nice serving of vegetables, protein and a little bit of cheese. And the sky is the limit with toppings – throw on whatever you and your family enjoys!

I admit, when I first got my cast iron skillet I was a little intimidated by it. Season it? Don’t use soap to clean it? Don’t let it rust? Seemed like a lot to fuss with. But I assure you, it’s not as difficult as it seems and once you get the hang of it, you won’t want to go back to whatever you were using before.

Teflon pans are not good for your health, at high heats they release toxins into the air. I put a lot of effort into(and my husband works hard to provide the funds for) providing my family with quality, organic, healthy meals and if you are the same, then don’t taint your food with conventional non-stick pans. Cast iron is virtually non-stick when seasoned well and cared for properly, so don’t be afraid to kick those teflon pans to the curb!

Also, cast iron pans are some of the most affordable cookware on the market, so if you haven’t jumped on the cast iron train, now is the time!

How I Clean and Care For my Cast Iron

Cast iron is incredible easy to clean. Even if you find yourself with a skillet that has some stuck on food, it releases so easily from the cast iron pan. Nothing like trying to scrub a stainless steel pan with fried eggs in the bottom -yikes!

After I cook with it, run the warm pan under hot water and scrape off any leftover food. Use a scrubby(without soap) to clean the pan. Dry the pan most of the way with a paper towel and put the pan back on the stove on low heat to finish drying the pan completely. When the pan is dry, but very warm from the stove, add a scoop of coconut oil to the pan and rub it in with a paper towel. Turn off the stove and your pan is ready for use again.

I have been playing mad scientist in the kitchen lately and I have a bunch of new cast iron recipes coming your way, so if you don’t have a skillet, now is the time to snag one!

This recipe serves 6. Feel free to cut the recipe in half if you have a smaller family as the leftovers don’t keep well.

Melt coconut oil in cast iron skillet over medium heat. Turn oven onto high broil. Dice up the vegetables reserving half of each pepper and 1 tomato(we won’t roast these, but reserve them for using fresh as toppings). In a large bowl combine melted coconut oil and cumin. Add half of the peppers, the whole diced onion, 1 tomato and both zucchini to the bowl and toss with coconut oil mixture. Add vegetable mixture to cast iron skillet and put under broiler until tomato and peppers are blistered. Usually takes around 10 minutes but keep a close eye on this as broilers vary greatly – don’t burn them! Stir the vegetables every few minutes to ensure all sides are getting roasted. Chop the cooked chicken and toss with chile lime seasoning and set aside. Once the vegetables are soft, remove them from the skillet and allow them to cool. Preheat oven to 450* F. Combine the raw veggies with the cooked veggies, add the chicken and toss together.

Assemble: Add layer of tortilla chips to the bottom of the skillet, then add half the veggies and chicken mixture and half the cheese. Add another layer of chips, then the rest of the veggies and chicken and top with remainder of cheese. Place skillet in the preheated oven for 5-10 minutes, until the cheese on top is melted. Remove from oven and serve immediately with your favorite toppings.

Want to pin this for later? Hover over the image until the red “Save” button appears. 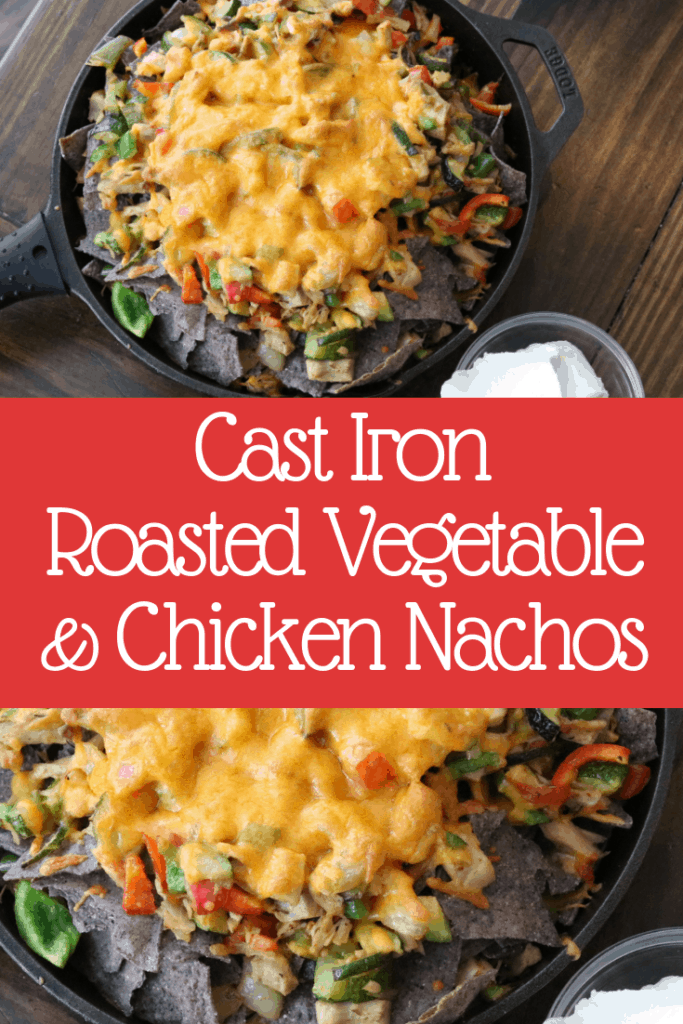 DIY inspiration straight to your inbox!

Hey! I am Kristin! I have been married to my husband Scott for 12 years. Together we have 4 amazing kids that we home educate. You can find me on any given day cooking our meals from scratch, working on perfecting my sourdough loaves, filming my latest YouTube videos, crafting or dreaming up our next diy or home renovation project, or best of all, spending quality time with my kids, my family and my friends.

I realized our finished house wasn’t even on my

Today was well drilling day 🎉🎉 Such an exci

Heading into the home stttrrreeetttccchhh of the b

Whew! We are coming up on the last month of our bu

“Let yourself be silently drawn by the strange p

I’ve never loved a place like this. I can’t wa

There’s no filter and it’s not a perfectly pos